Skip to content
Recent Rate Increases: Are They A Blessing In Disguise?

Recent Rate Increases: Are They a Blessing in Disguise?

So, you’ve been in the market for a new home for a long time, and now the interest rates have started to go up. Great…just great… 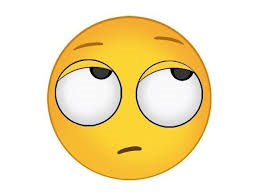 But, as a Buyer looking at the glass as half full, the recent rate increases and projected further Fed rate increases may be a good thing. As most of us know, the Fed will adjust interest rates with the hope of spurring all sorts of other changes in the economy. These changes can affect both recessions and inflation.
To guard against, or to mitigate recession, the Fed wants to encourage consumers to spend. The Fed will lower rates to encourage consumers to borrow so spending can increase, which should boost economic growth.

Put Simply, the Fed cuts rates to make borrowing cheaper; thereby, making goods, services, and housing cheaper. After The Great Recession, the Fed kept rates near zero for an extended period to achieve just that. In time, the housing market came roaring back to become the red-hot “Seller’s” market that we’ve noticed for at least 2 years, if not longer.

Inflation, on the other hand, refers to the rise in the price of goods and services (Including Housing), and inflation is a sign of a healthy economy.

(2)  However, if inflation is left unchecked, it can eventually lead to a significant loss of purchasing power.  In fact, a high rate of inflation over a long, extended period of time might even lead to the creation of future bubbles in markets. Therefore, to curb unhealthy inflation, the Fed will try to accomplish the opposite, and cool the economy.  And you guessed it, the Fed raises rates. The effect of higher rates throughout the economy will range from consumers spending less by borrowing less on credit cards, to borrowing less on car loans, and yes… to even bidding up housing prices to excessive levels.

The net result of rate increases as they relate to long-term interest rates, (ie., mortgage rates) is that the hoped-for result is more nominal appreciation in housing while borrowing costs will still remain very affordable. To put it another way, many Buyers will be paying slightly more for a mortgage payment, but they may not end up paying as high of a purchase price for their next home.

The 3 graphs below depict the history of interest rates and pricing.

This first graph depicts the rise in the30-year mortgage rate over the past 12 months. 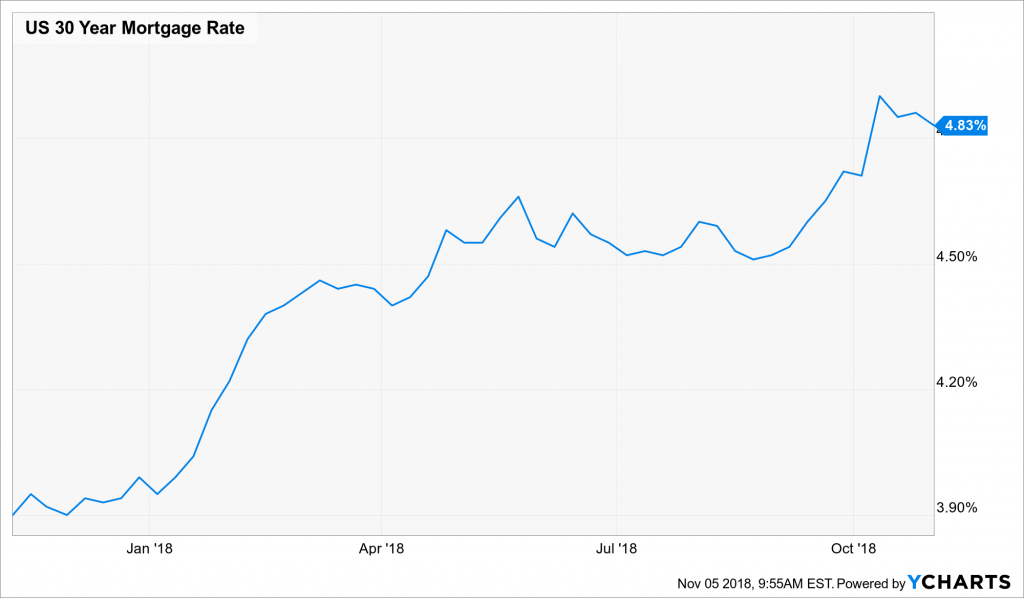 This Second graph shows the history of the 30-year mortgage rate going back to 1970. 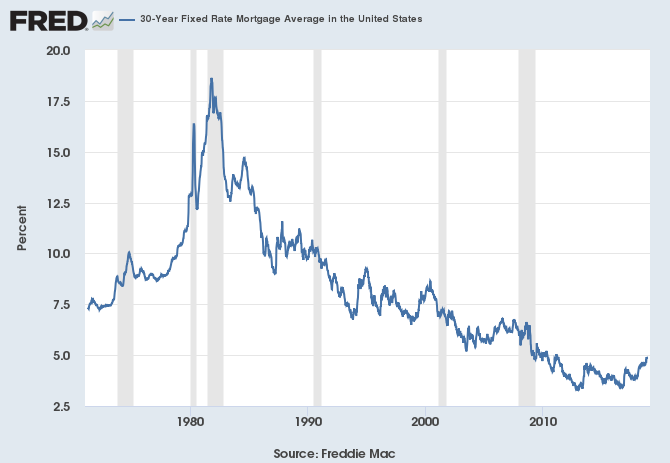 As you can see by the first 2 graphs; although mortgage rates have ticked up almost a full 1% throughout the last year, they are still incredibly low compared to prior decades when the housing market was also strong, robust, stable and proportionately steady.

Finally, the third graph shows the average sales price for homes in West Michigan as reported from 1998 through 2017 by GRAR. 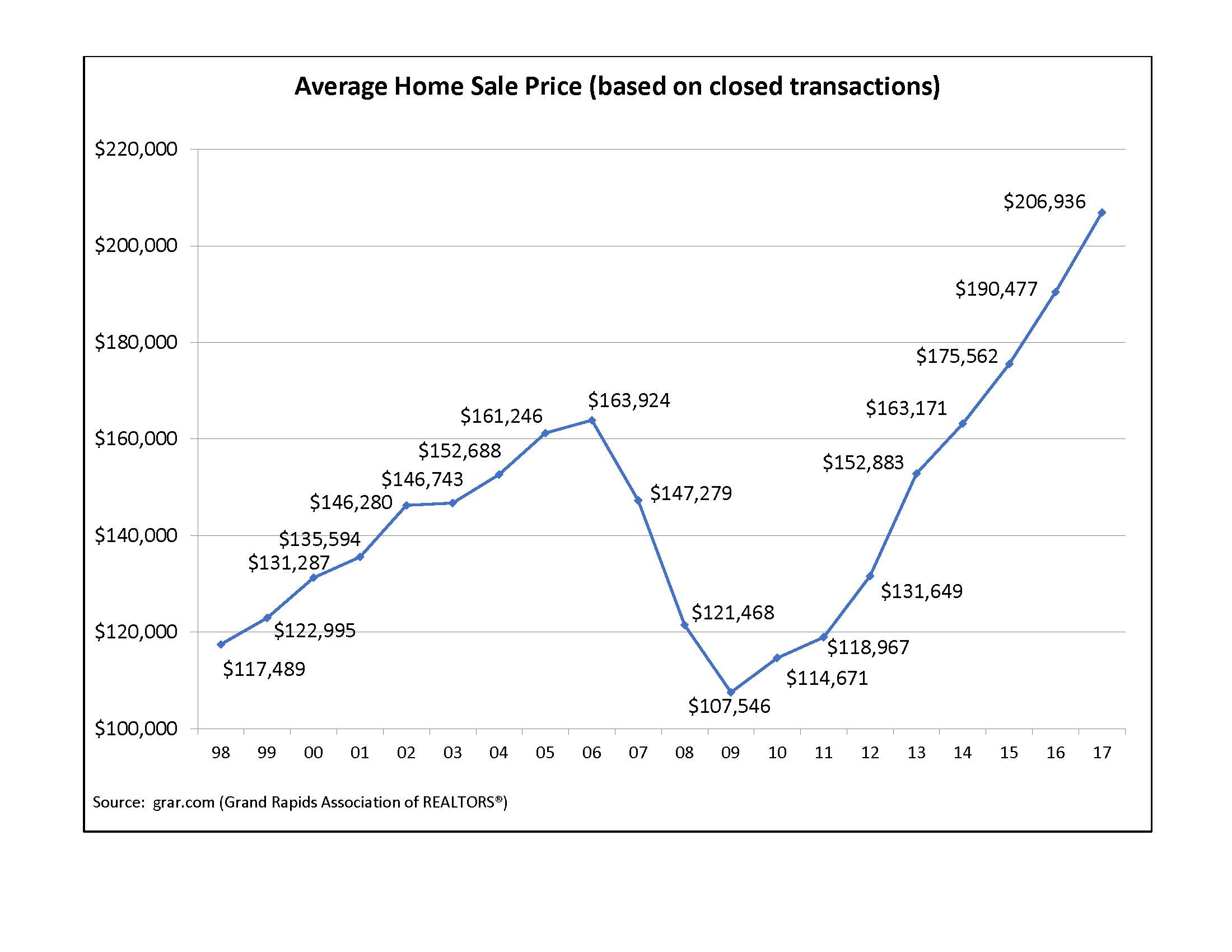 It is worth noting that in the bottom graph the rate of appreciation in housing for the 8 year period between 1998 and the pre-bubble year of 2006 was approximately 40% or 5% per year. In comparison, the rate of appreciation between the 8-year recovery from 2009 to 2017 (which was fueled by many years of near zero percent Fed rates) was closer to 90%, or 11.5% per year. A case might be made that the near zero percent Fed rate policy, may produce the historic low-interest mortgage rates that are not only no longer needed, but no longer productive for the long-term health of the housing industry.

The appreciation we have seen in the housing market over the past 9 years has been instrumental to our recovery, but a high rate of appreciation may not be beneficial over an extended period of time. Thus, the end result of too low of mortgage rates, for too long can have an effect of actually locking more Buyers out of the market, rather than helping them. The effect of slightly higher interest rates should return the housing market to a more normal rate of appreciation that will be sustainable for decades to come. Indeed, an added benefit of increased interest rates may give Buyers a much better chance of getting their offer accepted if the rate of borrowing slows.

As the cliché goes, “there’s no such thing as free lunch”. In economic terms, that cliché can be construed as, you can’t borrow at 3% for a mortgage, and expect to get a rate of return of 5% on a certificate of deposit. Nor, over a long period of time, can we expect to borrow at 3% for a mortgage in a good economy, and see marginal growth in the rate of housing prices. Balance is a good thing.

The views expressed in this blog are largely mine; although, I have researched and cited from the sources shown below. As a Residential Loan Officer, I personally do not see 2018’s uptick in mortgage rates as a bad thing. As I write this blog, it is not intended to be a negative article or blog coming from my position at all. Even for those who are looking to sell in the future, the slight uptick in mortgage rates may also be a good thing. Most Sellers will be looking to buy again. If the Fed rate increase will have the effect of slowing down the rate of appreciation (inflation), the Seller would still be able to sell their home for more, but make out by paying less on their next home. Perhaps Seller’s might even be able to make a “contingent offer” when they could not before, something that will also help supply if done on a larger scale.

At this point in time, depending on the loan program, property type, credit score, etc., most fixed interest rates are still ranging in the lower 4%’s to upper 5%’s. That is still pretty darn good! Having said all this, we have the lowest APR’s for fixed-rate mortgages in the market guaranteed!

FacebookLinkedInEmail
Do NOT follow this link or you will be banned from the site!